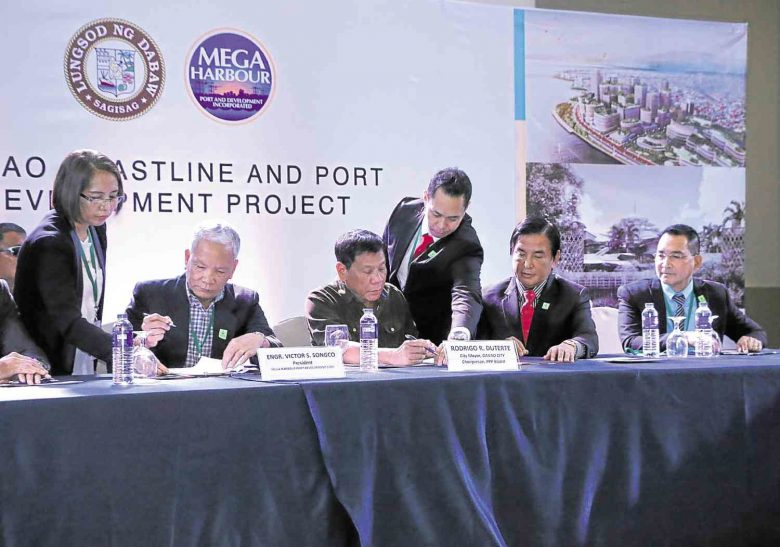 DAVAO CITY — The Davao Gulf Metropolitan Development Authority (DGMDA), with a charter similar to that of the Subic Bay Metropolitan Authority, is in the legislative works to handle the development of a freeport zone covering various local governments in the region.

“This will be good for business, especially the tourism sector, and will rationalize the overall development of the whole Davao Gulf into a comprehensive investment destination,” Mindanao Business Council Chairperson Vicente T. Lao said in an interview.

Speaker Pantaleon D. Alvarez, Jr. announced during the groundbreaking of the Hijo Industrial Estates in Davao del Norte last week that he will file the bill for the establishment of the DGMDA.

“I will file the bill creating the Davao Gulf Metropolitan Authority when session opens in July,” Mr. Alvarez said in an interview on the sidelines of the event.

With the creation of the DGMDA, all lands five kilometers from the shoreline of Davao Gulf will be reclassified for commercial, industrial and residential use.

Mr. Lao said most of these areas are not being used for agriculture, “but since it is officially still classified as agricultural land, most banks will not accept it as collateral for development projects.”

Mr. Alvarez recently filed House Bill 5501, or an Act prohibiting the acceptance, processing, and approval of applications for land use conversion of agricultural lands, irrigated lands, and irrigable lands for non-agricultural purposes.” The bill’s explanatory note, however, indicated that the non-conversion program focuses on lands acquired under the Comprehensive Agrarian Reform Program.

Mr. Lao said there should be a comprehensive study on the actual use of the land along the coast to determine if there is a need to exclude from the DGMDA zone those still being used for agricultural purposes such as rice fields and fish ponds.

Mr. Alvarez said there is a P500 million allocation for the creation of the DGMDA and he is optimistic that his bill will be approved by the second quarter next year.

He added that architect Felino A. Palafox, Jr. has been tapped to create the masterplan for the DGMDA zone, which includes the municipality of Don Marcelino in Davao del Sur, Davao City, Davao del Norte, and Davao Oriental up to Cape San Agustin.

All five provinces of the Davao Region — Compostela Valley, Davao del Norte, Davao del Sur, Davao Occidental, and Davao Oriental — and the independent component city of Davao all have coastal areas along the gulf.

Mr. Alvarez said while the DGMDA administrator would be leading the development of the Davao Gulf zone, the cooperation of the local government units are crucial to its success.

“It will spur development in the Davao Region because we will put everything there, including power and water, but it is up to the local governments to convince investors to locate in the area,” he said.